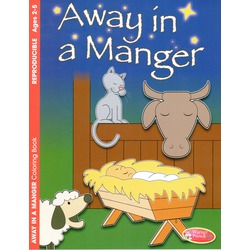 If asked which Christmas carol I would choose as the favorite of children, I would have to say, Away in a Manger. Not sure why, but every time I hear it, I think of kids, and of my having moved on to more “mature” carols.

The cattle are lowing, the baby awakes,
But little Lord Jesus, no crying he makes.

Maybe the author meant nothing by that last line, but it always seems to me that he or she was suggesting that because Jesus was God, he would never cry like other children (by the way, the notion that this hymn was written by Martin Luther is false). I’ve heard it explained that crying is a reaction to want, and want is sinful, and Jesus didn’t sin, so Jesus wouldn’t have cried…

Jesus cried as an adult, why not as a kid? Jesus got angry. Jesus suffered hunger and thirst and pain. I think it’s okay if he cried as a baby. In fact, we may be in trouble if he didn’t, as it’s a major part of our theology:

We also know that the Son did not come to help angels; he came to help the descendants of Abraham. Therefore, it was necessary for him to be made in every respect like us, his brothers and sisters,  so that he could be our merciful and faithful High Priest before God. Then he could offer a sacrifice that would take away the sins of the people.
Since he himself has gone through suffering and testing, he is able to help us when we are being tested.

The writer is stressing that as our propitiation – as our substitute on the cross – Jesus had to be one of us. God’s wrath demanded a human sacrifice, as it were, so if Jesus was going to stand in for us, he had to do so as a human. A FULL human.

And you gotta admit, crying is as human as it gets.