Day 8: In the Bleak Midwinter 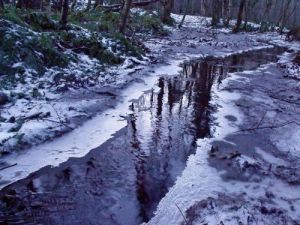 As I’ve been digging into hymns and carols for these blog posts, I’ve become more acutely aware of lyrics that are likely inaccurate, historically. Like Silent Night, for example. Was the night of Jesus’ birth really that quiet? Wasn’t the little town of Bethlehem swollen more than ever before with people who had returned home for the census? Isn’t that why Mary and Joseph couldn’t find a motel room and instead camped out in a barn? Is it likely that all of those extra people went to bed extra early, so that the whole community would be extra silent?

Now don’t get me wrong. I love Silent Night. It isn’t Christmas til I sing Silent Night at the  end of every Christmas Eve service. But it is interesting…

Today’s carol has similarly interesting – and historically questionable – lyrics in its first stanza. It’s called In The Bleak Midwinter, and while I own and enjoy some strikingly beautiful renditions of it, it does raise a certain question: was it really snowing in Bethlehem the night Jesus was born?

I did a little study and learned that snow in Bethlehem is a rare treat. It does happen, but only every few years. And that, of course, assumes that Jesus was born in the bleak mid-winter to begin with. Or December, for that matter.

The fact is, we don’t know when Jesus was born. December 25 wasn’t designated as the date for Christmas until the third, or even fourth century, primarily to combat other pagan festivals that occurred around the same time as the winter solstice.

So does that mean that we should dismiss this carol as not being true?

Should we suppose that Christina Georgina Rosetti (1830-1894) was meteorologically challenged when she penned this poem in London in 1872? Or was she thinking on another – and perhaps more important – level?

I can continue to enjoy this carol, despite it’s climatical inaccuracies, by thinking of the bleak mid-winter and the frosty moan and the iron-hard earth as a spiritual description of the human heart, rather than a physical one of the town of Bethlehem.

as it is written:
“None is righteous, no, not one;
no one understands;
no one seeks for God.
All have turned aside;
together they have become worthless;
no one does good,
not even one.”
“Their throat is an open grave;
they use their tongues to deceive.”
“The venom of asps is under their lips.”
“Their mouth is full of curses and bitterness.”
“Their feet are swift to shed blood;
in their paths are ruin and misery,
and the way of peace they have not known.”
“There is no fear of God before their eyes.”
(Romans 3:10-18 ESV)

And just as Paul uses this description of the human condition to set up his proclamation of the glorious gospel:

for all have sinned and fall short of the glory of God,
and are justified by his grace as a gift,
through the redemption that is in Christ Jesus,
whom God put forward as a propitiation by his blood,
to be received by faith.
(Romans 3:23-25 ESV)

so Ms. Rosetti uses her description to do the same:

Our God, Heaven cannot hold Him
Nor earth sustain;
Heaven and earth shall flee away
When He comes to reign:
In the bleak mid-winter
A stable-place sufficed
The Lord God Almighty,
Jesus Christ.

Because after all, until we get real with our own spiritually meteorological condition, the gospel isn’t the gospel.

And that is as true as it gets.