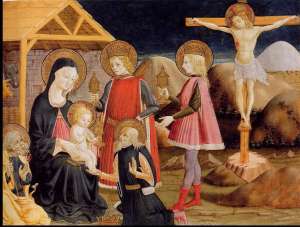 Today, on Day 17, I had to review which carols I had and hadn’t covered. To my surprise, I had not yet written about today’s carol: What Child is This.

A very popular and well-known song, it was written in 1865 by English writer, William Chatterton Dix, following a sudden near-fatal illness. The illness confined Dix, only 29, to bed rest for several months, during which he went into a deep depression. Yet from that experience, he wrote many hymns, including today’s carol, which was eventually set to an existing traditional tune, Greensleeves. Note that Greensleeves is the name of a tune, not the name if this carol:

What child is this, who, laid to rest,
On Mary’s lap is sleeping,
Whom angels greet with anthems sweet
While shepherds watch are keeping?
This, this is Christ the King,
Whom shepherds guard and angels sing;
Haste, haste to bring Him laud,
The babe, the son of Mary!

This first stanza is a great proclamation in itself, but if you’ve been following the blog throughout the month, you may have noticed a theme that is borne out in the words of the second stanza:

Why lies He in such mean estate
Where ox and ass are feeding?
Good Christian, fear: for sinners here
The silent Word is pleading.
Nails, spear shall pierce him through,
The Cross be borne for me, for you;
Hail, hail the Word Made Flesh,
The babe, the son of Mary!

I don’t think it’s because the writer was depressed that he mentions the cruelty of nails and spear and cross right after writing about a sweet little baby sleeping on his mommy’s lap.

Just as Simeon did the day he met eight-day-old Jesus in the temple on the day of Jesus’ circumcision. Simeon had grown old waiting for God’s promise that he would see the Messiah before he died. On the day that promise came true,  “he took the child in his arms and praised God, saying…”

“Sovereign Lord, now let your servant die in peace, as you have promised.
I have seen your salvation, which you have prepared for all people.
He is a light to reveal God to the nations, and he is the glory of your people Israel!”
(Luke 2:28-32 NLT)

But then, after the celebrating and the dancing and the praising God for the miracle of this baby, Simeon looked Mary dead in the eye and said:

“This child is destined to cause many in Israel to fall, but he will be a joy to many others. He has been sent as a sign from God, but many will oppose him. As a result, the deepest thoughts of many hearts will be revealed. And a sword will pierce your very soul.”
(Luke 2:34-35 NLT)

The theme I hope you are seeing, if you are following the blog and meditating on the words of these hymns, is this:

More than ever before, I have been meditating on this truth at Christmas. It completely changes the way I see everything associated with the season. It has put everything into proper perspective, which was not lost on William Dix, as he penned the third stanza, even in his depression:

So bring Him incense, gold, and myrrh;
Come, peasant, king, to own Him!
The King of Kings salvation brings;
Let loving hearts enthrone Him!
Raise, raise the song on high!
The virgin sings her lullaby.
Joy! joy! for Christ is born,
The babe, the son of Mary!