Christmas is first and foremost about one thing. Just one.

Jesus – God with us in the flesh – came to save us from the curse of sin that entered the world at the beginning of time. The fall of humanity in the disobedience of Adam and Eve didn’t just cause a minor inconvenience. Being banished from the Garden of Eden wasn’t just about a simple cross-town re-location. No, that one act was disastrous, and affected all creation, from the greatest tragedies to the most minor aches and pains. That hangnail? A result of sin. Gastric reflux? Yep, same deal. The struggles of life all trace their origins to the same moment. In theological circles, it’s called The Curse.

And to Adam, God said,
“Because you have listened to the voice of your wife
and have eaten of the tree
of which I commanded you,
‘You shall not eat of it,’
cursed is the ground because of you;
in pain you shall eat of it all the days of your life;
thorns and thistles it shall bring forth for you;
and you shall eat the plants of the field.
(Genesis 3:17-18 ESV)

Theologically speaking, because the ground is cursed,  all of life will now require more effort. Not that work is bad – no, work was part of the original plan. But it was to be enjoyable, to provide one with a sense of purpose. But now, it’s hard. There are ridiculous hours and lousy bosses and too much taken out in taxes. Work – and everything else – is cursed.

For Adam, the curse played itself out through lousy soil: thorns and thistles growing where they shouldn’t, just adding to the toil. For us, sins and sorrows grow where joy was intended to.

All this explains why in 1719, Isaac Watts wrote this stanza as a part of his hymn, Joy to the World… 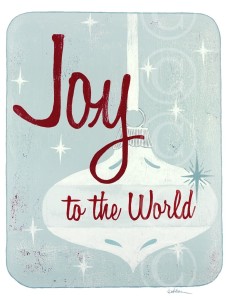 This stanza, while recognizing the curse of Adam’s fall, is a bold statement of the Joy brought to the world by Jesus Christ in his birth, and the promise that will one day be fully realized. While it hasn’t arrived in its fullness, the birth of Jesus promises to usher in a day – and an eternity – when there will be no more thorns or thistles. There will be only blessings. And those blessings will be universally found. As far as the curse has extended, the joy of Jesus will extend. In the nativity, God seals a deal that assures a new heaven and a new earth: a new creation that supersedes, replaces, and completes the one we now know.

When you sing or hear these words this season, be mindful of the difficulties of life, no matter what they are.

And then be reassured of the promise you have in Jesus!