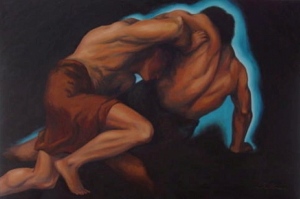 Jacob was desperate. years ago he had swindled his brother out of something that didn’t belong to him – the first-born birthright of an ancient jewish family. he schemed and connived, and stole it right away from his twin-yet-firstborn brother, Esau. and now Esau wanted revenge. he was chasing Jacob with a small army and Jacob was making his own funeral plans.

the night before he expected to meet his irate brother, Jacob sent all of his family, servants, flocks and herds on across the jabbok river, and then camped beside it alone for the night. a long, sleepless night…

The same night he arose and took his two wives, his two female servants, and his eleven children, and crossed the ford of the Jabbok. He took them and sent them across the stream, and everything else that he had. And Jacob was left alone. And a man wrestled with him until the breaking of the day. When the man saw that he did not prevail against Jacob, he touched his hip socket, and Jacob’s hip was put out of joint as he wrestled with him. Then he said, “Let me go, for the day has broken.” But Jacob said, “I will not let you go unless you bless me.” And he said to him, “What is your name?” And he said, “Jacob.” Then he said, “Your name shall no longer be called Jacob, but Israel, for you have striven with God and with men, and have prevailed.” Then Jacob asked him, “Please tell me your name.” But he said, “Why is it that you ask my name?” And there he blessed him. So Jacob called the name of the place Peniel, saying, “For I have seen God face to face, and yet my life has been delivered.” The sun rose upon him as he passed Penuel, limping because of his hip. (Genesis 32:22-31 ESV)

there are some really cool parallels here between Jacob and any of us who wrestle with God. note that he stayed up all night, struggling and wrestling with God. while the text paints the picture of the physical struggle, it was no doubt spiritual and emotional as well.

if you’ve ever been desperate or fearful beyond sleep, you know what this feels like.

but notice that Jacob never told God what to do. he never made a bargain. he didn’t ask for a way out. he only asked for one thing: God’s blessing.

when we wrestle with God in fear and desperation, how often is our request that simple… and that profound??

see then, that this request was answered. God blessed Jacob. God may not necessarily take away the pain or the problem, but we can always be assured of the blessing of his love, his care, and his presence.

the question for us to ask is, ‘will that be enough’?

finally, notice how Jacob was different the next day, and ever after that encounter. in addition to having been given a new name (significant in its own right), he walked differently. he limped. and people could see it.

when you and i truly encounter God through trying times, we, too, should walk differently. visibly differently. and people should see it.