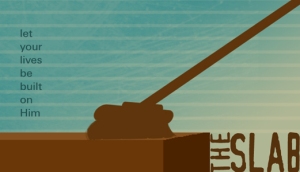 continuing our series called The Slab, we again looked at some of the foundational teaching of Jesus – our theme for the series. our focus was in Luke 14, where Jesus addresses a crowd about what it means to be a disciple…

“But don’t begin until you count the cost. For who would begin construction of a building without first calculating the cost to see if there is enough money to finish it? Otherwise, you might complete only the foundation before running out of money, and then everyone would laugh at you. They would say, ‘There’s the person who started that building and couldn’t afford to finish it!’

“Or what king would go to war against another king without first sitting down with his counselors to discuss whether his army of 10,000 could defeat the 20,000 soldiers marching against him? And if he can’t, he will send a delegation to discuss terms of peace while the enemy is still far away. So you cannot become my disciple without giving up everything you own.

“Salt is good for seasoning. But if it loses its flavor, how do you make it salty again? Flavorless salt is good neither for the soil nor for the manure pile. It is thrown away. Anyone with ears to hear should listen and understand!”

notice that crowds were following Jesus. but they weren’t following him in the way that he was asking them to. they were “walking behind” him. they were looking for miracles and teaching, but they hadn’t committed. Jesus now asks for a commitment there are three important things to note in the first few verses:

a person who claims the death and resurrection of Jesus for their own eternal life is called to be a disciple. there is no distinction between salvation and servanthood. a saved person is not just saved FROM sin, death and the devil. a saved person is also saved FOR a life of obedient discipleship, which means being on the exact same mission as Jesus – the redemption of others by giving ourselves away. there is no separation of these two.

2. a disciple of Jesus loves Jesus above all others. as his followers, we are called to love all people, beginning with our own families. but even our deepest love – in comparison – must look like hate when compared to our love of Him.

3. a disciple of Jesus must be willing to die. for some, that might mean physical death. for all of us, it means death to the things that keep us from outright and radical obedience to his call and his Word. three things in particular may need to die.

a. relationships. no relationship should ever keep us from following Christ as a radically obedient disciple. if it does, it has to go. period.

b. possessions. frankly, this means our biblical understanding of money. if we are not obediently tithing the first 10% of our income, we are just walking behind Jesus. we aren’t following him. beyond that, the use of the other 90% must also reflect our discipleship. 10% is a starting point, not a goal. any THING that is more important than our obedience as a disciple also has to go.

Jesus ends this command to radical and obedient discipleship with a few illustrations of the difficulty and the cost. we aren’t just along for a ride. this is serious business, this Christ-following obedience. there is a cost involved.

but it is worth it. that’s his promise. he is always with you and gives you his Holy Spirit to empower you.

so… are you following? or just walking behind?

This entry was posted in Uncategorized and tagged discipleship, following, luke 14:25-35, obedience. Bookmark the permalink.